Good Old Days: All About Snakes And Ladders

What are Snakes and Ladders?

Snakes and Ladders is a numerical and grid-based board game. Snakes and ladders are strewn around the board, obstructing or assisting your progress. The goal of the Snake and Ladders board game is to get your token from the first to the last tile based on your die rolls. Along the route, you'll come across a square with a ladder that can assist you in reaching the connected square, or a snake that will cause your piece to slide down to the snake's bottom. The first player to reach the top square wins.

Our version of the Snakes and Ladders game is compact and sturdy, allowing you to bring it anywhere. It is also magnetic so you won't have to worry about losing any game piece.

Get your very own classic old school Snakes and Ladders at $1 only. Browse more of our Traditional Games.

What are the Snake and Ladders rules? 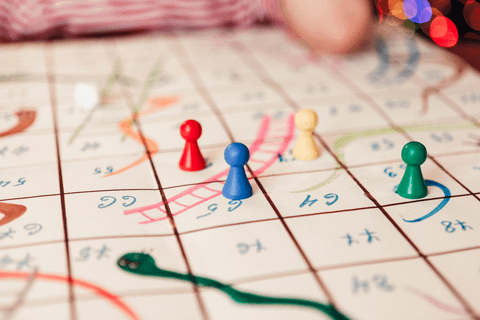 All players start at the starting square (usually labelled “1”) with their game piece. Snakes and ladder board game is usually played with 4 game piece and 1 die. Players will take turns to roll the die and move accordingly to the number they threw. If the player’s final placement is on a ladder, they will get to advance to the end of the ladder. But if the player’s final placement is on a snake, they must move down to the lower end of the snake. If player rolls a “6”, they get to roll for another turn. Whoever gets to the last square, usually labelled 100 wins.

Here's a video tutorial on how to play Snakes and Ladders

How to beat the game: Snakes and Ladders Strategy

If you thought Snakes and Ladders was just a game of chance, you were wrong. To reach to square 100, the player will require 39.2 die rolls on average. If you're only playing with one other person (and you're competitive enough), you should go first because the first player has a slightly better probability of winning.

One intriguing fact I discovered is that the smallest conceivable game is only seven rolls long and occurs twice out of every thousand games played. If you're interested in mathematical concepts, check out this excellent article about Mathematical Analysis of Snakes and Ladders. I would have never thought that a game like Snakes and Ladders for kids could have such an amazing math concept.

Watch this video to see how this Youtuber incorporated both math and science into Snakes and Ladders!

History of Snakes and Ladders

Before it was known as Snakes and Ladders (or Chutes and Ladders), it had gone by names like Leela, Moksha and Patama. However the earliest name made known was Gyan Chauper, believed to have emerged from Northern India or Nepal. It was used as a teaching tool on the effects of good deeds against bad deeds and teaches the philosophy of destiny and desire.

Snakes and ladders were traditionally filled with symbolic figures such as gods, angels, and ladders at the top, as well as animals, flowers, and humans on the sides. Both the ladders and the snakes have a deeper meaning. The snakes signified immoralities such as anger, theft, lust, and murder, while the ladders represented moralities such as faith, humility, and generosity. The symbolic significance of this game is that doing good will lead to salvation, while doing bad will lead to rebirth as a lower form of existence.

Here's an interesting video talking more about Snakes and Ladders and the philosophical meaning.

Buy Snakes And Ladder Board Game

Buy Snakes and Ladders game online that is ideal to play in the classroom, house or wherever you want. Can be played for up to 3 players and suitable for all ages. This board game helps develop creativity and strategy.

OneDollarOnly has a variety of traditional games like pick up sticks, chapteh and more. Local stock with fast delivery, available to buy in bulk.

Read more about the Traditional Games that we used to play in Singapore or discover more about the history of these old school games in our Good Old Days series: